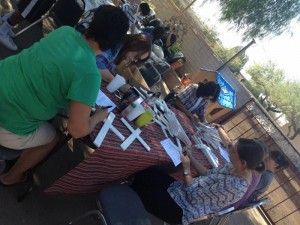 For thirteen years now, Derechos Humanos has been uniting the community in our annual Day of the Dead Pilgrimage to honor all of those migrants that have perished in the Southern Arizona Desert. We were hoping that many years ago we would be able to discontinue our pilgrimage because the deaths would have stopped. Instead, here we are again preparing for our 14th annual pilgrimage, which will take place this Saturday, November 1st. Unfortunately, again this year we will be carrying too many crosses -122 – as we complete our 8-mile walk from St. John’s Church to San Xavier Mission. Each cross that we will carry represents a human life lost to harsh conditions in the desert, conditions that people have been forced to traverse as a result of anti-immigrant and anti-human policies.

What is unique and troubling about this year is that several news outlets have featured stories that, according to Border Patrol, the deaths along the U.S./Mexico border have reached a fifteen-year low due to their efforts. While it’s true that this Saturday, October 25th, many of us came together to make 122 crosses compared to 183 in 2013, not a single person that added a name or the word “Desconocido/a” (“Unknown”) to the crosses was happily reflecting on the smaller number. We should not have to gather to make a single cross, or to lament the unnecessary death of a single human being. Statistical analyses will clearly reveal that the death rate continues strong when you compare the rate of death to the number of crossings. Migration continues to be at the lowest level in the last 40 years, yet hundreds are still dying. It is also disingenuous to equate the number of recovered remains with the true number of deaths, given that hundreds of remains have not and will never be found. Most importantly, additional militarization of our borderlands will not only increase the number of deaths, but will also decrease the possibility of finding remains. As people are pushed further into more and more desolate terrain, the real numbers will be masked.

This year, of the 122 remains recovered in Arizona, 41 families received a phone call in which they were told that their brother, sister, mother or father had died after crossing the U.S./Mexico border. 89 of the 122 recovered remains have yet to be identified. This means that at least 89 families continue to live with the anguish of not knowing what happened to their loved ones. Unfortunately, many more family members never even make it to the list we receive from the Pima County Office of the Medical Examiner each year, which totals 2,771 since we began keeping track and making crosses in the year 2000.

As the Border Patrol and U.S. policymakers continue to devalue and dehumanize the lives of migrants, funneling them into deadly terrain, we as a community will, yet again, honor and commemorate each human life lost. We hope you can join us along with other groups such as No More Deaths, Corazón de Tucson, the Calpulli Teoxicalli, Tucson Samaritans, Southside Workers’ Center, Veterans for Peace, Casa Mariposa, Fundación México, Casa María, and Borderlinks.

Also, there is still time to sponsor this event. If you or your organization is interested in sponsoring, please call us at 520-770-1373 or e-mail us at coalicion@derechoshumanosaz.net Please indicate whether or not you would like to donate $25, water, or just send participants and let us know how you would like to be listed in our program. 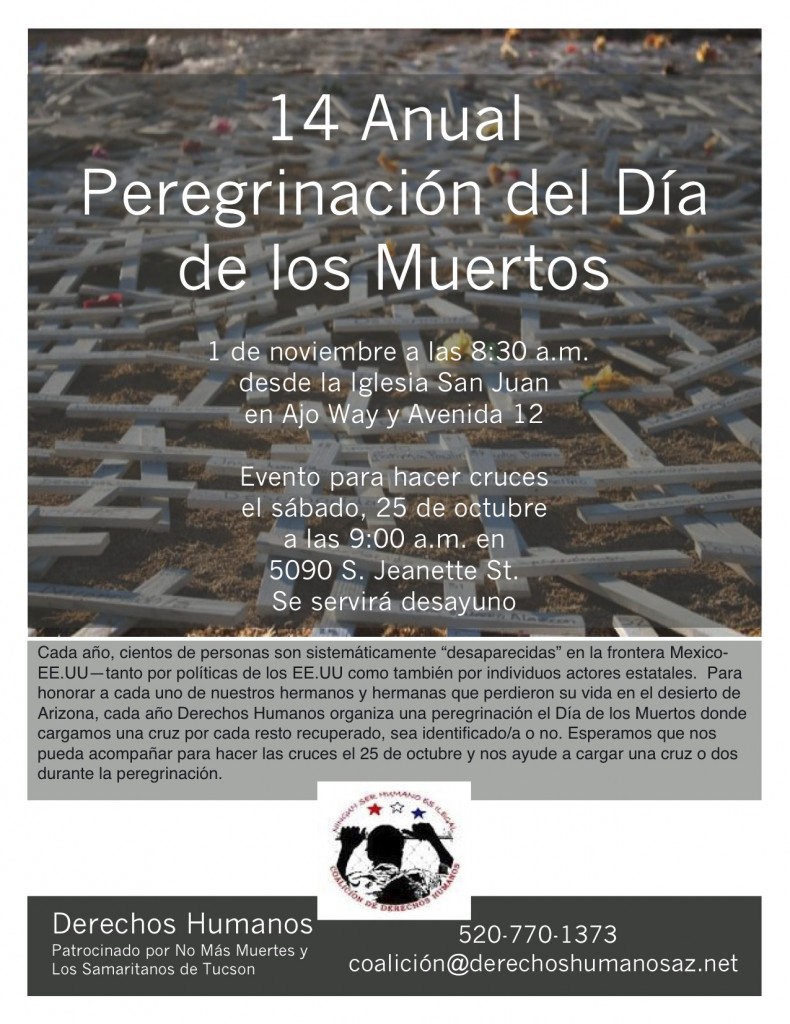 Filed under: Announcements and Events by Derechos Humanos
Comments Off on Remembering the Dead