We are a group of organizations, community groups, and individuals who are working to end Operation Streamline and the criminalization of migration.

Facts about Operation Streamline and the Criminalization of Migration

Every weekday in Tucson, as part of Operation Streamline, groups of migrant men and women are collectively processed for the crime of illegally entering or re-entering the United States. Prior to the court proceedings, the migrants meet with a public defender who explains the charges, describes the offer of a plea agreement, and conveys the migrant’s options. In Tucson, migrants may have 30 minutes of one-on-one time with a lawyer; in other Operation Streamline cities, it may be 10 minutes at best. When the court convenes, migrants appear in court in groups — as many as 70 at a time — all in shackles. Almost all plead guilty and are given criminal prison sentences to be followed by deportation. The prison sentences range from 30 to 180 days.

Operation Streamline was launched in Texas in 2005 as a “zero-tolerance” policy against undocumented migrants. Over the next few years it was implemented in severalother border cities, including Tucson in 2008. Prior to Operation Streamline, undocumented migrants usually received civil deportation proceedings for the misdemeanor of Illegal Entry. Migrants were not usually criminally prosecuted unless they were charged with illegal reentry after deportation, or had other criminal offenses. Under Operation Streamline’s “zero tolerance” policy, initiated by the Border Patrol as a “deterrence” strategy, all unauthorized entrants are to be charged with criminal violations of federal law. They face prison sentences and subsequent deportation for both Illegal Entry as well as Illegal Re-entry if they have previously been deported.

Currently, in Tucson, the only migrants adjudicated through Operation Streamline are those who have reentered after deportation. In the Tucson Operation Streamline proceedings, migrants are offered a plea agreement by which the court drops the felony re-entry charge in exchange for the entrant agreeing to serve a prison term for the misdemeanor charge of illegal entry. Migrants are usually encouraged by their lawyers to simply plead guilty and accept the plea agreement in order to remain incarcerated for the shortest amount of time as possible. Almost all agree to this, and thus receive prison sentences of one to six months. However, this leaves them with a criminal record and a bar to future legal immigration.

It should be noted that among those being prosecuted in Operation Streamline are many long-term residents of the U.S. who were deported when their undocumented status was discovered. Most of them were attempting to return to their homes and families when they were apprehended by the Border Patrol. The long-term consequences for Operation Streamline re-entry charges are significant, especially given that the Obama administration has deported more people than any other administration in U.S. History – some 400,000 individuals annually since 2008. Documentation throughout the U.S. and in Arizona show that many of these deportations are for minor traffic stops, such as driving without a license, and racial profiling is a major concern.

Operation Streamline raises serious and troubling questions about constitutionally protected due process, as a result of en masse hearings and limited time with lawyers. 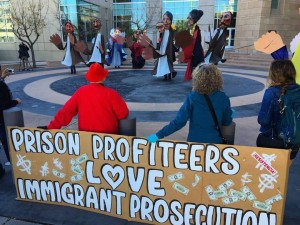 Growth of the Private Prison Industry

Latinos now make up more than half of all those sentenced to federal prison despite making up only 17% of the country’s population, largely because of immigration prosecutions. 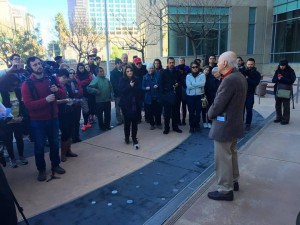